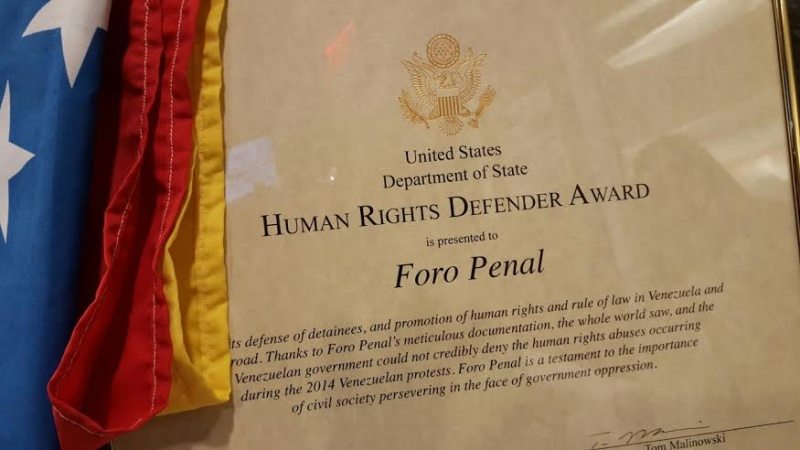 Washington.- The US Government granted today an award to the Venezuelan non-governmental organization Foro Penal, for its work defending “political prisoners” in Venezuela and for “showing the world the violations” of human rights that occurred during the protests last year in the country.

The US Department of State granted its annual prize of Human Rights Defenders to the Penal Forum, an organization of lawyers and human rights defenders who carry out legal advisory and defense work.

“Thanks to its meticulous documentation, the whole world saw, and the Venezuelan Government could not credibly deny the human rights violations that occurred during the anti-government protests that Venezuela experienced during the first half of 2014, said the Undersecretary of State from the USA, Anthony Blinken.

The award seeks to highlight the work of civil society “that perseveres in the face of government repression,” Blinken added at the award ceremony.

“The risk for the Penal Forum is very real, but its work goes on,” said the senior US official, who said that members of the organization have been “harassed, detained or physically attacked.”

Blinken granted the award, consisting of a commemorative plaque, to the founder and director of Foro Penal Venezolano, Gonzalo Himiob, and to the executive director of the NGO, Alfredo Romero.

The organization accepted the award on behalf of the “comrades who defend human rights in Venezuela,” in the words of Romero.

“What we want to see is that those people who have been arbitrarily detained come out of prison, the best prize would be that the 75 political prisoners in the country can go out and have an independent judicial system that works for the people and not as a weapon for political persecution,” affirmed Romero.

The Executive Director of the Penal Forum said in English that his organization has “learned to fight every day against fear”, because “fear paralyzes”.

The State Department also presented the same award to Azimjon Askarov, a journalist and human rights activist from Kyrgyzstan, for his efforts for peace in the Central Asian republic between Uzbek and Kyrgyz.

Askarov is still in prison, so his son was in charge of amassing the recognition.